The Campaign for the Two Tunnels Greenway 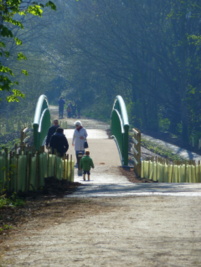 The route's now open: this page looks back a few years, when, starting in 2005, a sustained grassroots campaign from people local to it brought about a partnership between Sustrans the local authority and the campaign group to manage the conversion of the northern end of the Somerset and Dorset Railway into a shared-use path.

Physical work started in March 2010 at Devonshire Tunnel, read about how it progressed on the Two Tunnels blog.

Though the route is substantially complete, we remain interested in its welfare, continue to meet regularly, and organise volunteer work parties. 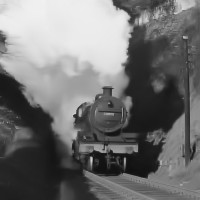 The railway closed as a through route in March 1966. Subsequent years saw suggestions for the reuse of the heavily engineered line in one form or another.

Bath City Council purchased the line north of Combe Down Tunnel, and converted the stretch north of Devonshire Tunnel into a 'Linear Park'. The Two Tunnels blog has some documentation from this era. The work carried out was often destructive to the railway engineering, but the new use safeguarded the route's alignment from industrial development (i.e. at Monksdale Road) or conversion into a road (i.e. between Bellotts Road and Dartmouth Avenue). In the process, though, Devonshire Tunnel's north portal was buried and the approach cutting filled with material from the demolished Monksdale Road bridge and embankment. 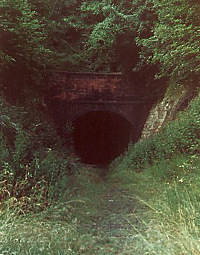 South of Devonshire Tunnel, the entire route as far as Wellow remained in use as an informal footpath - including the mile-long Combe Down Tunnel. However, Tucking Mill Viaduct was left in poor condition and became vulnerable to vandalism. The structure eventually received block walls at either end. Later, the assets of the old line were sold by British Railways, and Wessex Water bought and sealed Combe Down Tunnel.

In Oldfield Park, local knowledge of the old line receded, and by the twenty first century, while there was general recognition that Linear Park had been a railway, with the filled cutting at Bloomfield looking like a quarry, many presumed that it was a short branch to a quarry and overlooked the fact that it once ran rather further south. Devonshire Tunnel, running smokily but usefully beneath Wellsway, had faded from the cityscape.

In 2005, Mark Annand, fed up of the climb over Combe Down, and aware that the remaining structures from the route were deteriorating, spoke about the old line at a meeting of the Bath Cycling Campaign. To show everyone the potential as well as the work involved, we arranged a route ride of part of of what would become the Two Tunnels Greenway.

The idea was clearly ambitious, and it was at this point that Frank Tompson agreed to campaign with Mark for the re-establishment of the old line as a shared-use path.

The campaign gained its dedicated web site at the turn of 2006, and this helped spread the word, firstly to other individuals prepared to work to give the old railway a new purpose. By February a set of dedicated supporters met in 'The Raven' public house - forming a committee to encourage a structured approach to the campaign.

In late February, with the 40th anniversary of the closing of the old railway fast approaching, we were fortunate enough to bring together an on-site meeting that included the leader of the local authority, the chief executive of the paths charity Sustrans, and a representative from Wessex Water. The weather behaved, the potential of the route was evident, and Sustrans were to be in a position to be able to help with funding - with the proviso that they needed to secure lottery funding for a scheme called Connect2.

The following weekend, the public launch of the Two Tunnels campaign took advantage of an anniversary event commemorating 40 years since the line's closure, when a 7F locomotive was brought to Green Park Station for a single weekend - at which we collected nearly 700 signatures in support of the Two Tunnels route as a shared path for people on foot and cycle.

These signatures formed the bedrock of the campaign, the eventual success of Sustrans' lottery bid underwrote much of the cost, and almost eight years later, the Two Tunnels route opened on 4th April 2013.

Along the way, the campaign was helped by a wide range of supporters old and young, both local to Bath and from further afield - and we're really grateful for the help and support we received in rescuing this part of the old line and giving it a new purpose as a shared use path. We'll leave the last word to a descendent of the engineer responsible for building the Somerset and Dorset Railway's 'Bath Extension' back in the 1870s. 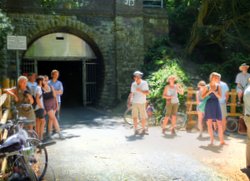 'My great grandfather, Thomas Andrew Walker, built the Bath to Evercreech line in 1872-4, including the two tunnels. We are delighted with the use to which you are putting this long-forgotten railway.'

Maintained for Two Tunnels Group by the membership. Site updated 1st May 2022 •